Behind the Scenes | Cinematic & Storyboard

Cinematic trailers are more than just a part of game; it gives the strong feeling of immersion like a short film.

Through this blog post, we would like to introduce the cinematic trailers of the new classes in 〈Lineage〉, 〈AION〉, and 〈Blade & Soul〉, which have focused more on their ‘characters’.

We would like to share the knowhow of our producers through showing how they have reflected the game’s world view and the background narrative within the short time of two minutes and how the charm of each character is effectively displayed and the storyboard, which is an essential part of work to create the visual narratives in cinematic trailers.

The Cinematic trailer for 'lancers' in Lineage

Lancers putting up their lances with firm belief

After Ken Rauhel took power, the group of lancers that used to be the essential part of the Golden Castle resigned and led secluded lives. However, they came back to the battlefield upon the order from Deforge.

The spectacular action scenes to unfold after a breathtaking silence

The essential part of the video was supposed to be the fact that ‘the lancers that were forgotten by the people after their retirement were coming back as a new class’. To express this part, we developed different storylines for the former and the latter part of the video, while connecting the two parts with the image where ‘a pen would be transformed into a lance’. The two parts were actually produced in a separate manner, and the director of each part was also different.

As was mentioned, even though the two parts were separately produced, we gave much attention to all the processes, including the quality of each scene and natural motion, to make sure that the tone and manner of the overall video would be consistently maintained.

The former part of the video is relatively silent and static, while splendid action scenes are included in the latter part.

The former part of the video begins in a library and shows slow and static camera movements and limited movement of characters. We put much attention not only to the hand movements, as there were many scenes featuring a lancer writing letters without exposing his face, but also to the small details, including wrinkles and scars.

On the contrary, we made sure that the viewers would have diverse fun through applying more active camera movements, glamorous visual effects, and lively actions to the latter part of the video. 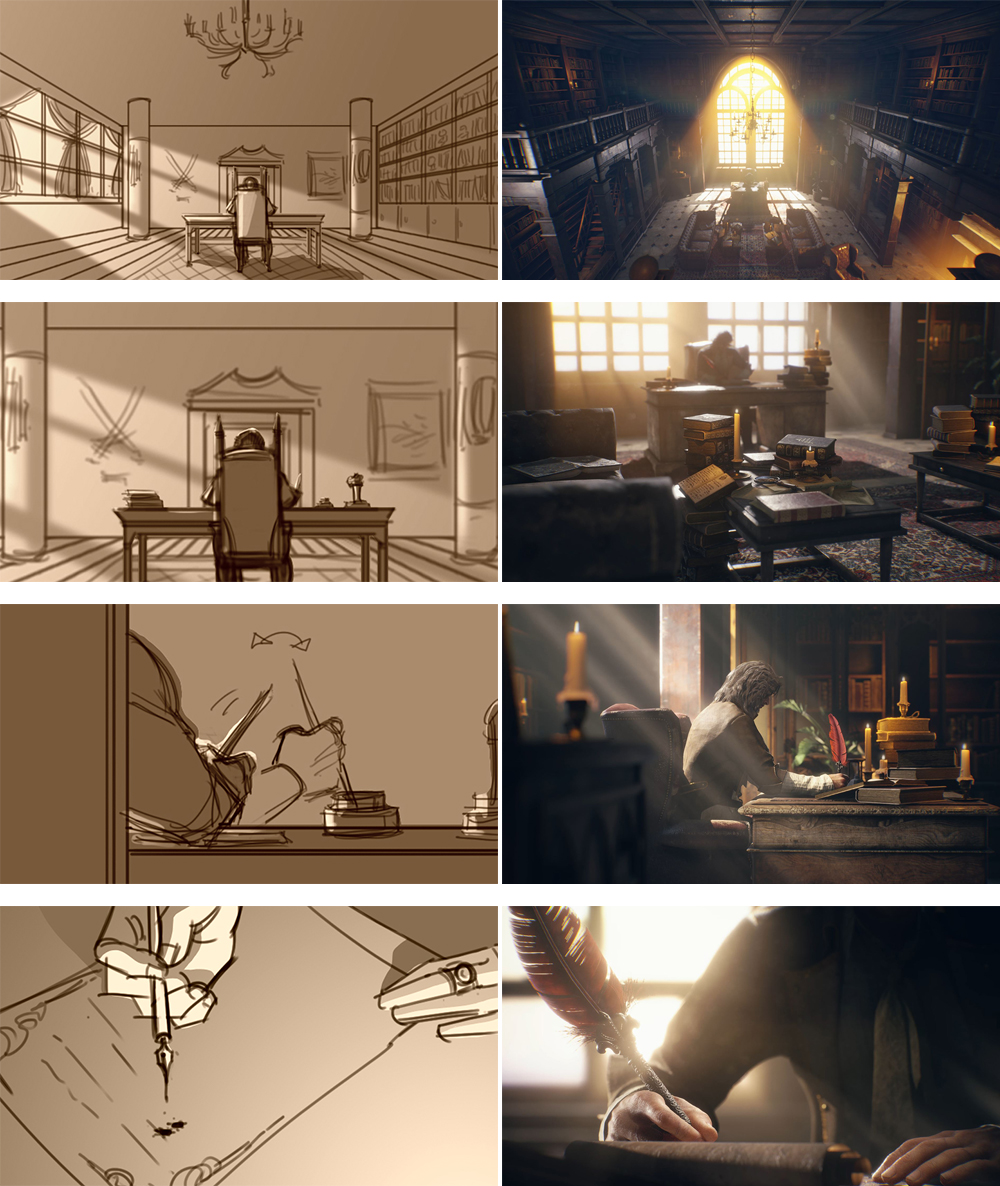 The former part of the video taking place in a library

The scene where a pen is transformed into a lance, indicating a change in the atmosphere in the latter part of the video

The cinematic trailer for 'painters' in AION

The support from Siel that had deep artistic insight and the talent of Irnin, a genius. It is not an exaggeration to say that the job of ‘painter’ was created by the aforementioned two. Irnin, who was known as the first Painter, invented Aether and took the lead in the effort to increase popularity of fine art through accepting talented students. However, many of the first-generation painters, including Irnin that was mired in sorrow after Siel perished, disappeared during Cataclysm, and even the remaining followers of Irnin were scattered after suffering from lack of support.

The people known as the second generation of Painters accepted a limited number of students, struggling to continue the legacy. The protagonist, who was reckless and unruly, used to be one of the students of a second-generation painter. One day, including the protagonist’s teacher, many second-generation Painters sacrificed themselves to save innocent lives amidst the ‘Fire and Chaos’ that dealt a blow to Artreia.

As a result, painters were recognized as a legitimate occupation in recognition of such contribution.

Realization of the battles with distinctive features, using the characteristics of watercolors

We focused on showing the mischievous charm of the protagonist and the battles with distinctive features using watercolors. In particular, since the concept where the painters would defeat the enemies using their ammunition including watercolors and paints should be well-expressed, we paid much attention to the production of visual effects so that they could be naturally materialized through multiple tests in VFX part.

The battle scene where the watercolor effects are naturally materialized

The video shows a short battle between guards and painters that takes place at a dark corner of a little village square, which is shown in contrast to splendid fireworks. 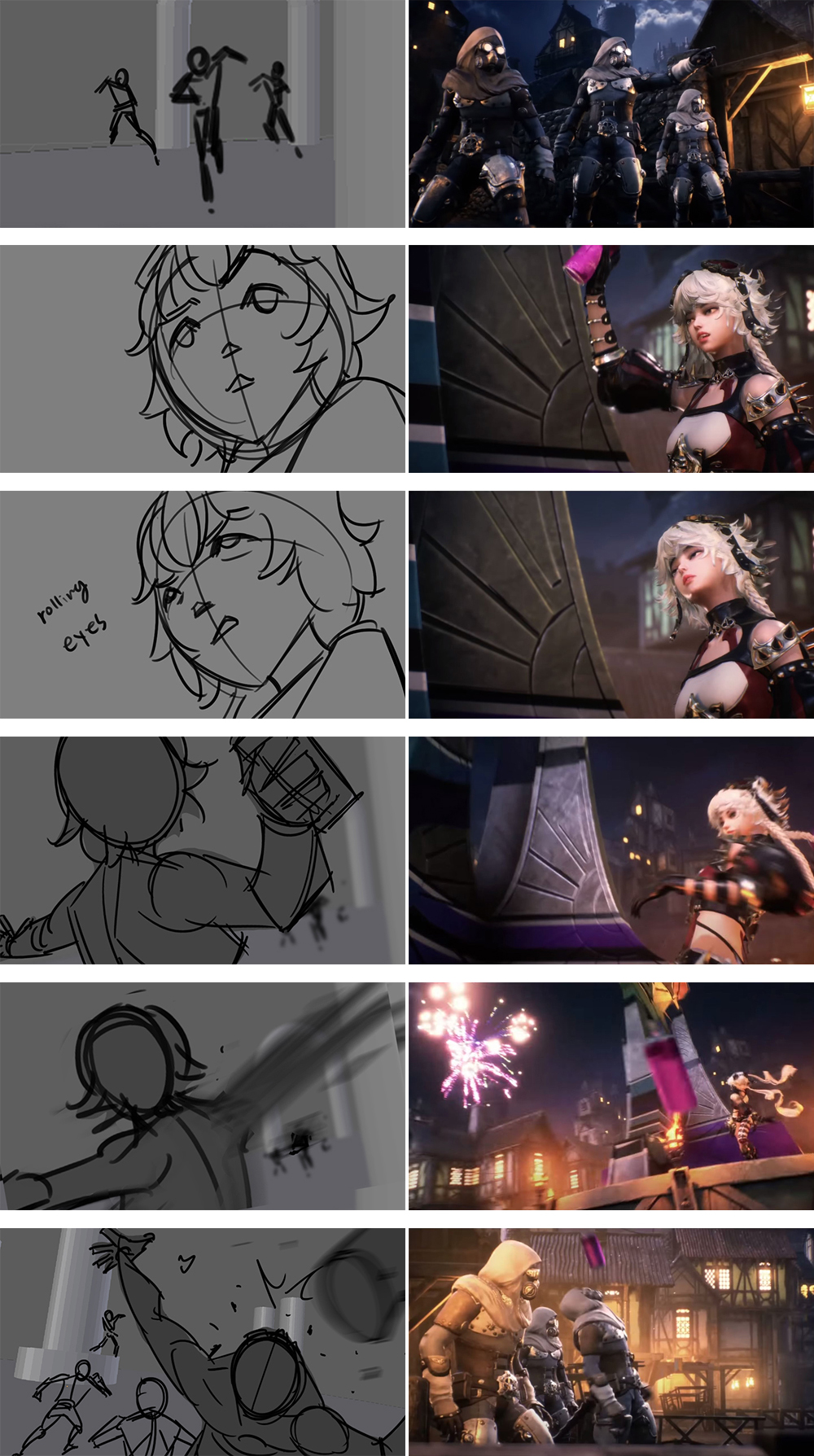 A speedy battle takes place starting from the scenes above.

Lastly, we came up with a new idea to apply fun elements to the ending. The logo painted by a painter in the end is an art called ‘anamorphic’. The pictures that are scattered here and there would be combined and completed, if seen from a certain perspective. 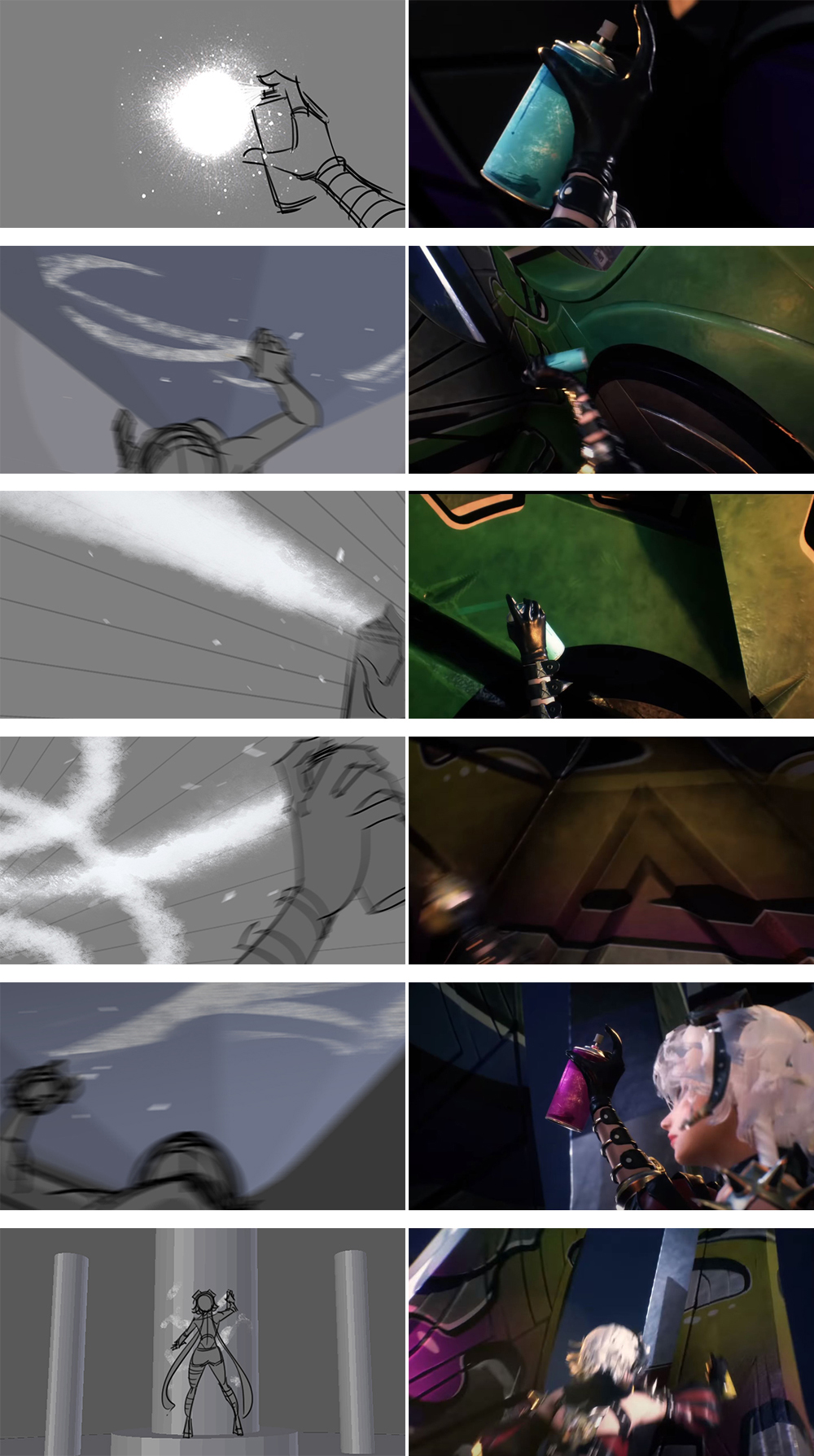 A painter painting anamorphic in the beginning of the video 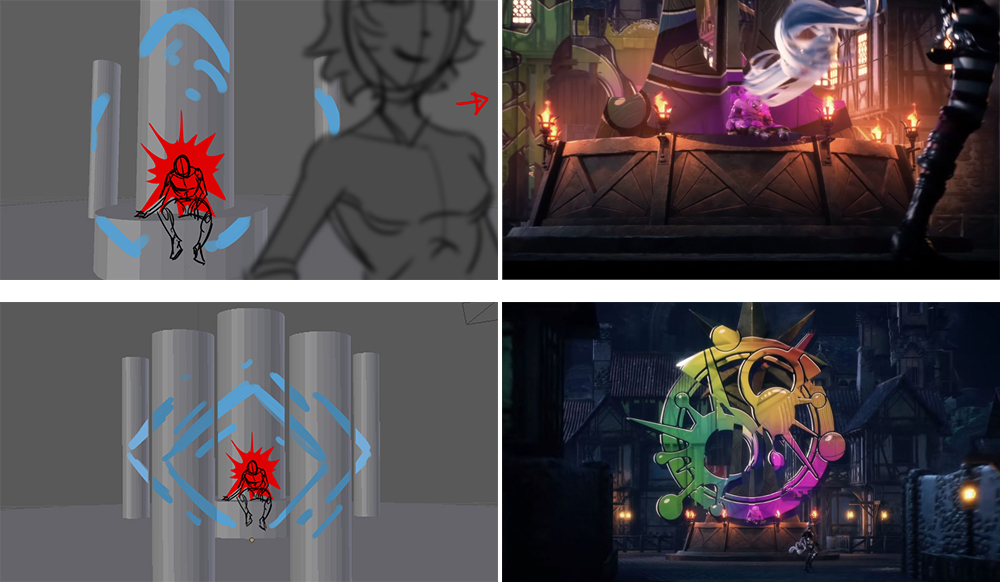 The anamorphic that is completed in the ending of the video

'Astromancer' is a ranged attacker who attacks her enemies with an orb containing celestial power. They can only be played by Lyn race and mainly have two types of power, including the one called 'Galaxy' which controls celestial power and the other called 'Ure' which commands the energies of the sky. The ‘Galaxy’ either escapes from its enemies through distorting spaces or cause fatal damages to the enemies through summoning the celestial objects in the universe. The ‘Ure’ may move fast using the vortex and summon clouds to give benefits to the allies and cause damages to the enemies.

The overwhelming scale of battles with monster mobs

In the beginning of the video, we tried to encourage the viewer’s interest and curiosity through showing only the silhouette of the characters in a dark and damp atmosphere.

Unlike in the videos of lancers and painters that were introduced above, the quadruped monsters appear in a mob. In this scene, we applied the mob simulation, the camara movements to increase tension, and the dynamic movements of monsters so that the monster mob could be displayed in the most effective way. In the following scene where they try to attack an astromancer, we applied the visual effect so that the viewers may feel as if countless bugs were running towards the astromancer at the same time.

The mob of quadruped monsters 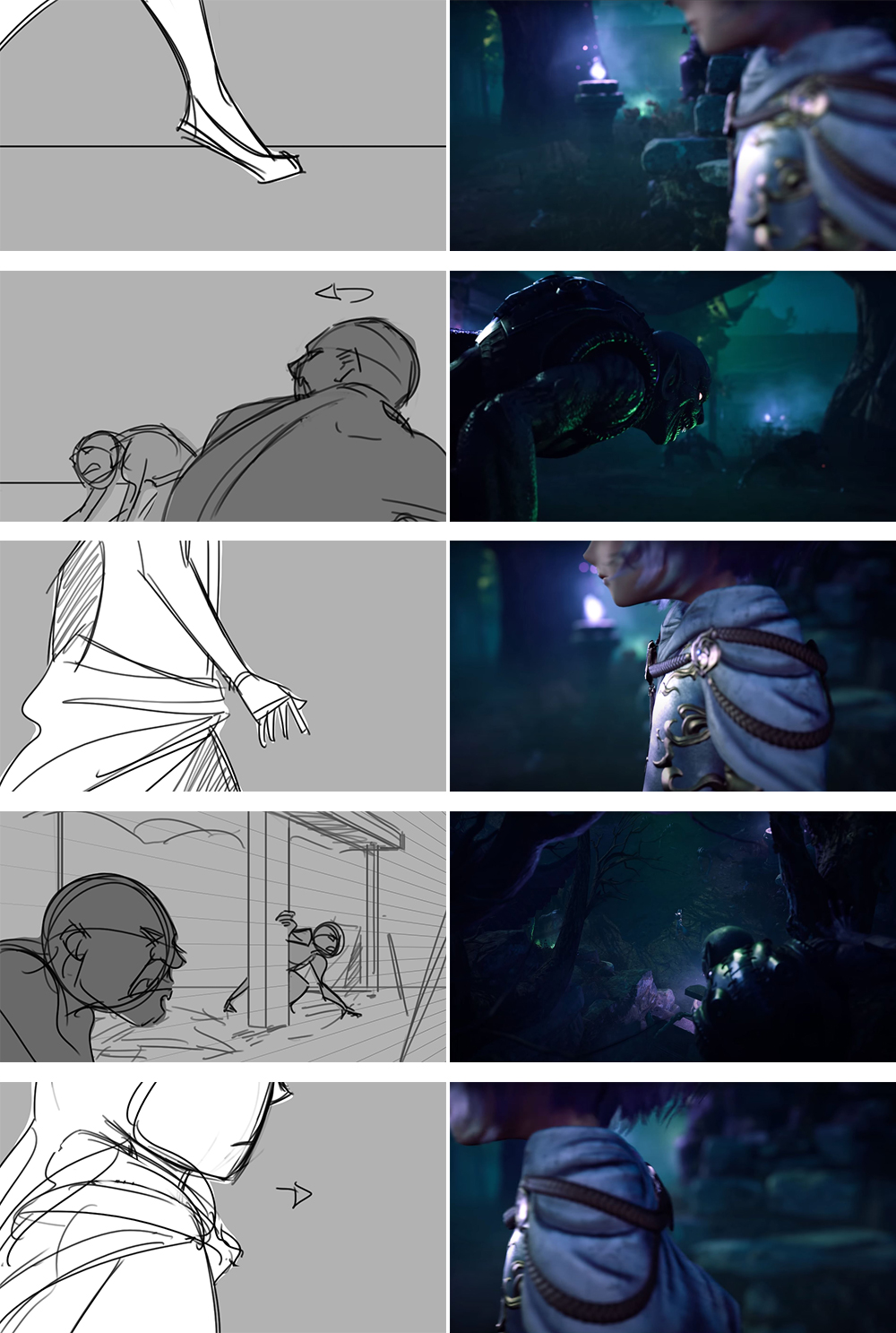 The astromancer that appears only in her silhouette in the beginning

The monster mob running towards the astromancer

The splendid visual effects applied to the skills of astromancer